Rather famously, members of the U.S. Congress did not involve any classroom teachers in their deliberations of the monumental No Child Left Behind legislation — which was the federal law governing K-12 education — when they passed it in 2001.

That, however, was not a singular moment in the annals of education legislation. State legislators routinely pass legislation about the operations and funding of public schools without asking educators what they think about it — or about what the consequences would look like on the ground, at school, every day.

In this post, North Carolina veteran teacher Justin Parmenter looks at this phenomenon as it relates to legislation involving class size in the state. Parmenter teaches seventh-grade language arts at Waddell Language Academy in Charlotte and is a fellow with Hope Street Group’s North Carolina Teacher Voice Network, which provides feedback to education policymakers.

His first teaching job was at a school on the White Mountain Apache Reservation in the poorest county in Arizona, where young people face extraordinary challenges. He started his career as a Peace Corps volunteer in Albania and taught in Istanbul. He was a finalist for Charlotte-Mecklenburg Schools Teacher of the Year in 2016, and you can find him on Twitter here: @JustinParmente

This first appeared on the website of EducationNC, a nonprofit corporation, and I was given permission to publish it.

Recently the education news waves in North Carolina have been dominated by talk of the impending class size crisis. Across the state, school districts are facing awful choices: cutting arts, physical education, and foreign language classes, swelling numbers at 4th grade and above to 40+ students, and holding classes in hallways in order to comply with an unrealistic law quietly inserted into the state budget in 2016.

When public outcry first began over the legislative changes, some state legislators acknowledged the law’s shortsightedness. House Education Committee Chair Craig Horn admitted the mandate was not “fully thought through with regard to unintended consequences.”

But with the quality of our public education at stake, how does a law like this get passed in the first place? And what can be done to prevent it from happening in the future?

With many education professionals right down the road at the Department of Public Instruction and thousands more experienced teachers in the field, every piece of education legislation should be thoroughly and systematically informed by best educational practices in order to yield optimal outcomes for our students. Unfortunately, North Carolina’s General Assembly has a pattern dating back to when Democrats were in the power of fast-tracking major education initiatives by placing them as special provisions in the budget to avoid the public debate and stakeholder input so vital to the creation of effective policy.

The current class size crisis may be the most recent example of what can happen when a legislature fails to listen to educators, but it’s hardly the first.

The literacy program Read to Achieve — created five years ago — suffered from the same malady. When Read to Achieve was passed in 2012, the legislation was intended to end social promotion and help 3rd graders avoid what Senate President Pro Tem Phil Berger has called the “economic death sentence” awaiting students who are unable to read proficiently. According to the legislation,

The goal of the state is to ensure that every student read at or above grade level by the end of third grade and continues to progress in reading proficiency so that he or she can read, comprehend, integrate, and apply complex texts needed for secondary education and career success.

Berger’s intentions may have been laudable, but it’s clear that Read to Achieve’s implementation lacks the educator’s touch. The initiative attempted to improve reading by increasing the volume of assessment in grades K-3 and ratcheting up the threats of retention, essentially punishing children for not being able to read well enough in early grades. That’s not the approach an effective teacher would take. A good educator works to understand where the child is coming from and develop unique supports that best fit his or her individual circumstances. A good educator knows that punitive measures seldom result in long-term success.

According to former N.C. Superintendent Dr. June Atkinson, when Read to Achieve was drafted, the Department of Instruction was very candid about the challenges it presented and the impact it would have. The department warned the General Assembly that the volume of portfolio assessments the legislation added to 3rd grade was too high and that the pace and funding of implementation didn’t provide enough professional development for teachers to effectively transition to the new system. The General Assembly had also slashed pre-K funding 25 percent from pre-recession levels at the time, and the department informed legislators that quality early childhood education was an important component of building a foundation for literacy. All of that feedback fell largely on deaf ears.

Data from a comprehensive 2014 University of North Carolina at Greensboro study on the first year of Read to Achieve reveals that the program struggled mightily from the beginning as a result of state lawmakers disregarding the advice of education professionals. The survey included responses from 66 district superintendents, 729 elementary principals, and more than 3,000 elementary teachers.

Respondents said that “educator input should have been more systematically and extensively sought in the design of the Reach to Achieve components and statewide rollout,” and indicated a need for more flexibility in using state funds for reading interventions. Eighty percent of K-2 teachers and 93 percent of 3rd-grade teachers felt that Read to Achieve had “resulted in a significant loss of instructional time.” Perhaps most concerning of all, teachers reported the number and intensity of assessments were “negatively impacting some students’ attitudes toward reading and their enjoyment of teaching.”

The report detailed educators’ feelings about the first year of Read to Achieve, and anecdotal information I collected from elementary teachers in various parts of the state suggests that little has changed. Teachers still report that students and educators alike are overwhelmed by the number of assessments and that Read to Achieve’s inflexible requirements are reducing time spent on other important topics such as writing instruction.

As one teacher put it, “We spend so much time testing that we honestly just don’t have the time to teach. If a student doesn’t do well then there is no time to go back and reteach, but instead, hope that they have time to tutor after school.” Schools still lack money to be able to provide more reading specialists to work intensively with struggling readers. Pre-K funding has improved slightly, but quality early education is still out of reach for many of our families.

If state Senator Phil Berger’s goal was to improve 3rd-grade reading, Read to Achieve does not appear to be working. Since the law was passed in 2012, the number of our state’s 3rd graders reading on grade level has actually dropped 3.1 percent: 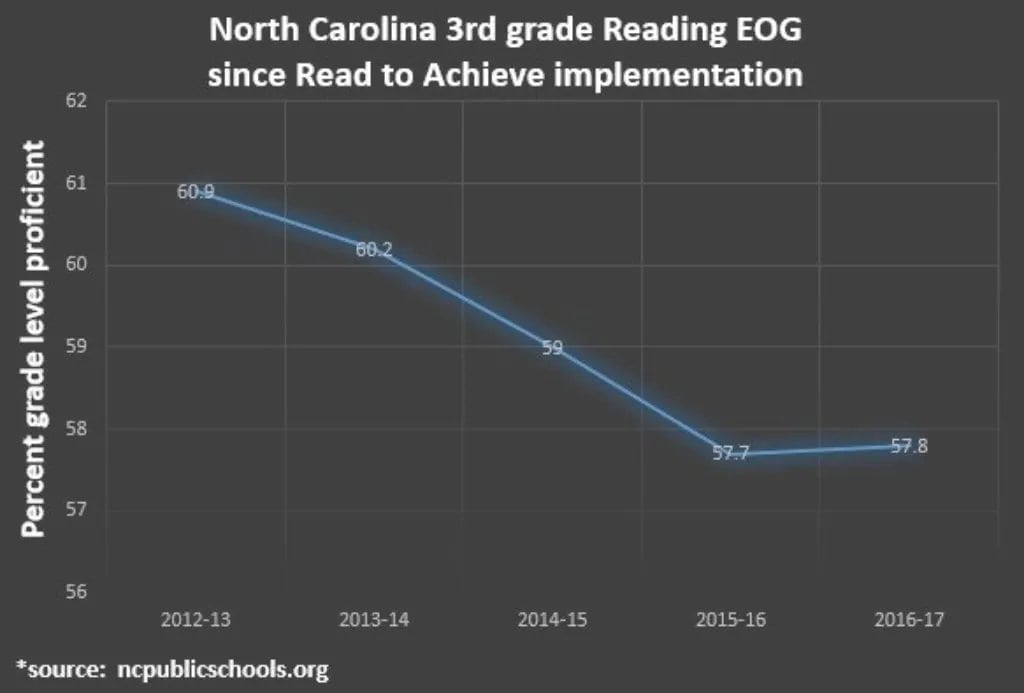 In addition, the number of students retained for not demonstrating reading proficiency on third-grade standards has risen each year since Read to Achieve was implemented, except for last school year when it remained flat. For clarification, students retained do not necessarily repeat the grade but are retained in a third-grade accelerated class, placed in a transition class with a retained label, or placed in a fourth-grade accelerated class with a retained reading label.

Had the General Assembly truly partnered with the Department of Instruction on improving early grades reading, the results might have been very different. Legislators could have provided the requested high-quality pre-K for more students, allowing them to enter kindergarten with a stronger foundation on which to build. They could have given instructional flexibility to districts rather than burying students from Franklin to Currituck under piles of inauthentic assessments that sap student motivation. If our leaders had been willing to allocate the resources, the law could have provided additional reading specialists and given existing teachers the professional development they need to find new, engaging strategies for supporting our struggling readers. Regrettably, that’s not what happened. 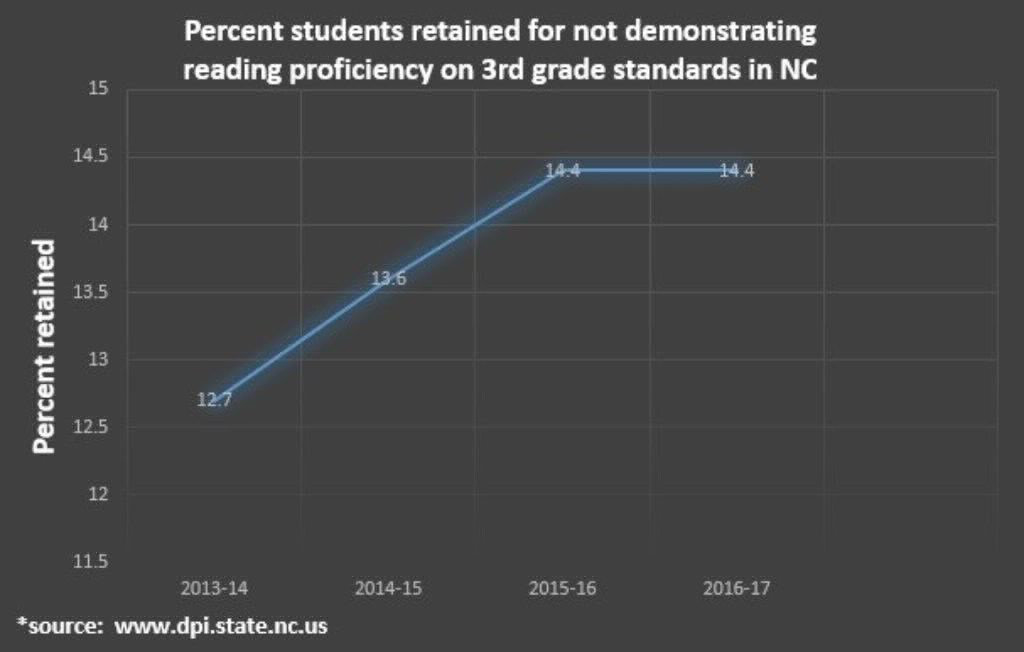