The every-other-weekend dad, born from two generations of soaring divorce rates, was once a conventional part of American culture. In recent years, more couples have been agreeing to parent after divorce as they did in marriage: collaboratively.

Now lawmakers are accelerating this trend toward co-parenting, with legislatures in more than 20 states this year considering bills that would encourage shared parenting or make it a legal presumption — even when parents disagree.

Kentucky this year passed a law to make joint physical custody and equal parenting time standard for temporary orders while a divorce is being finalized. Florida’s legislature overwhelmingly approved a bill last year to presume equal time for child custody plans, but it was vetoed by the governor. And in Michigan, lawmakers are considering a bill that would make equal parenting time the starting point for custody decisions.

The legal push for custody arrangements follows years of lobbying by fathers’ rights advocates who say men feel alienated from their children and overburdened by child-support obligations. This movement is gaining new traction with support from across the political spectrum, as more lawmakers respond to this appeal for gender equality and, among some conservatives, the frustration of a newly emboldened constituency of men who say they are being shortchanged.

“The way the system is set up now, two parents enter the courtroom. When they leave, one is a parent and the other is a visitor,” said Christian Paasch. (Astrid Riecken/For The Washington Post)

Many of the legislative gains recently have been propelled by the National Parents Organization, a group with roots in the fathers’ rights movement but now a broadened focus on children’s rights and parental equality. The organization includes some women members.

Critics of the bills, including women’s rights groups and some legal associations, say that stricter laws will roll back important protections against abusive or controlling former spouses and take discretion away from judges who are tasked with deciding what is in the best interest of children. They also say that the bills, which would directly apply to only the 10 percent or so of divorcing parents who cannot come to an agreement, are unnecessary because more divorcing parents are already choosing shared custody.

Laws that require joint physical custody could also lead to the elimination of child support in some states, women’s advocates say, disrupting a system that was designed to help women, who have historically been paid less in the workforce while performing more unpaid labor at home.

“That disparity in assets and earning power doesn’t simply disappear at separation,” said Molly Dragiewicz, an associate professor at Queensland University of Technology in Australia who wrote a book about domestic abuse and divorce.

Proponents emphasize that the bills overwhelmingly address parents who are otherwise fit and not abusive. They say that family courts are out of step with modern families and that the current system benefits highly paid lawyers while depriving millions of children of the chance to build meaningful relationships with their fathers.

“The way the system is set up now, two parents enter the courtroom. When they leave, one is a parent, and the other is a visitor,” said Christian Paasch, 37, chair of the National Parents Organization of Virginia.

A presumption of shared parenting would replace the “winner takes all” approach currently embedded in the law, he said, and replace it with a new message: “You will both still be parents, and you both matter to your children.”

Moms as natural caregivers
For more than a century, court decisions were guided by the “tender years doctrine,” a vestige, legal scholars say, of the cult of domesticity that put women on a pedestal as instinctive caregivers. 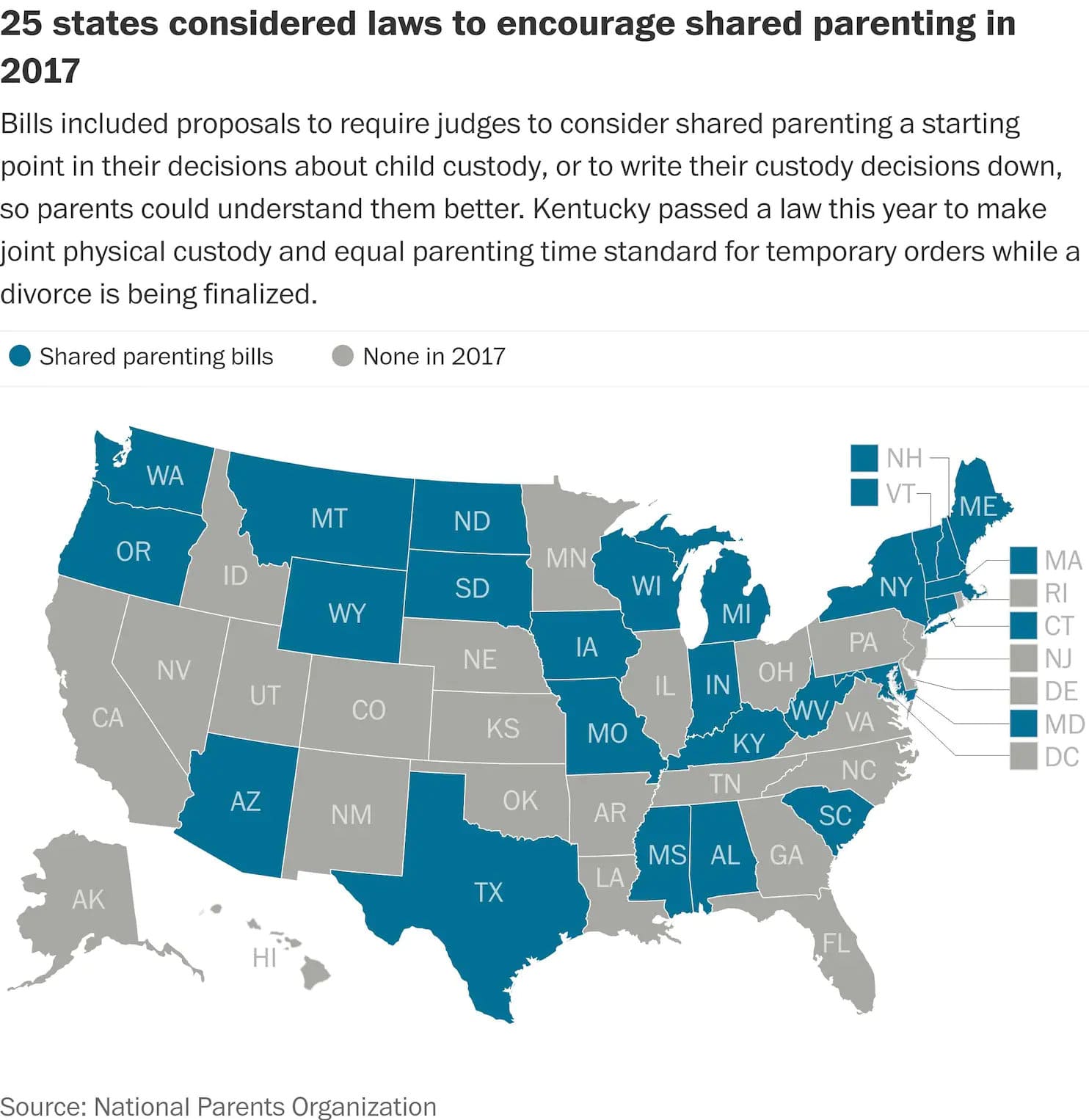 That began to change in the 1960s and 1970s, as more women joined the workforce and as no-fault divorce laws ushered in a wave of divorces.

The guiding principle in custody rulings changed to a more flexible and gender-neutral “best interest of the child” standard and states overturned previous rules that disallowed joint custody.

But despite changing laws, judges continued to use their discretion to award primary physical custody overwhelmingly to mothers in many places, reflecting a lingering bias, many say.

Fathers’ rights groups and other advocates have worked to make the laws stronger.

Statutes in the District of Columbia include a presumption that joint custody is in the best interest of a child, except in cases of abuse or neglect.
In Maryland, advocates have promoted bills that would create a presumption of joint legal decision-making and equal parenting time, but they have not made it out of committee.

In Virginia, Sen. Barbara A. Favola (D-Arlington) is introducing a bill that would require judges to communicate in writing the rationale for their custody decisions.
Read More >